The store will not work correctly in the case when cookies are disabled.

Be the First to Know

Skip to the end of the images gallery

Skip to the beginning of the images gallery

Be the first to review this product

$1,300.00
Availability: Out of stock
SKU
DNX997XR
Notify me when the price drops
Add to Wish List Add to Compare
Details

Kenwood's finest turns your dash into a media powerhouse

Kenwood's "Excelon Reference" imprint has been around for a little while now — long enough that Kenwood could coast on reputation alone. But they keep finding new ways to improve their best stuff, and the Kenwood Excelon DNX997XR navigation is no exception. With wireless Apple CarPlay® and Android Auto™ compatibility and an 6.75" touchscreen display with true high-definition resolution, it's already flagship-worthy. For 2020, Kenwood added better phone compatibility, camera enhancements, and three free years of Garmin map updates. The Excelon Reference badge also gives you the benefits of a 2-year warranty, high-voltage preamp outputs, and audiophile-quality audio components. 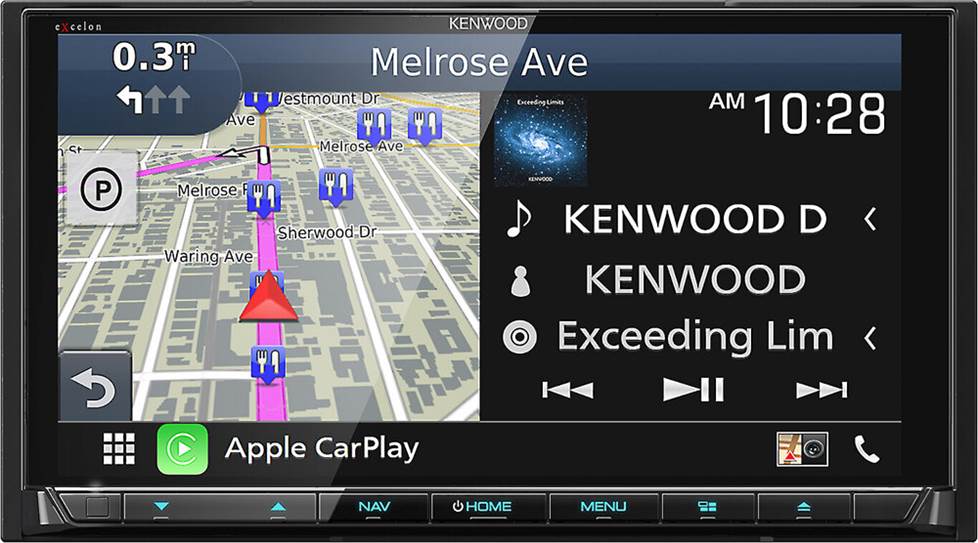 A high-definition display for easier viewing

The DNX997XR's 720p high-definition display is eye-catching enough for movie night while parked in the driveway, even if the sun's still out. The 6.75" capacitive display gives you pinch-to-zoom command over maps, and you'll be able to glimpse album artwork with unparalleled clarity, no matter the angle. The motorized display features reverse tilt, so you can find the optimum viewing position, even if your dash has a funky curve or two.

Thanks to built-in Wi-Fi®, you can enjoy the benefits of Android Auto and Apple CarPlay without connecting to the DNX997XR via USB. That's convenience on top of convenience, considering that you can now get maps, messaging, music, and much more done through the stereo using your fingers and either Siri® voice assistant or Google Assistant™ to control the action. Plus, you'll get easy access to many of your favorite apps — find out more at www.android.com/auto and www.apple.com/ios/carplay. In addition, the DNX997XR offers wireless screen mirroring for select Android phones, which lets you select apps directly from the Kenwood touchscreen.

Screen mirroring for iPhone® and Android™

If you're not a fan of CarPlay or Android Auto, the DNX997XR offers convenient screen mirroring for both iPhone and Android devices via wired USB connection. You'll need to have the "Mirroring for Kenwood" app on your smartphone to take advantage of this feature. Once you're up and running, you can see all the action from your phone right on the stereo's display. With Android devices, you'll also be able to control the phone via the stereo and vice-versa.

Garmin guidance with 3 years of updates

The DNX997XR boasts Garmin maps of the U.S., Canada, Mexico, Puerto Rico, and U.S. Virgin Islands. You'll also get reliable routing with spoken street names at turns, lane assistance, and realistic views of complicated intersections. 3D terrain views give you the lay of the land for even more assurance. You also get three years of free map updates from Garmin, so you're sure to stay current as roads and destinations change down the line — these updates only available via the Garmin Express app suite for PCs. Kenwood's interface also provides more opportunities for split-screen control, so you can still follow the maps as the stereo shows you what's playing or who's calling.

A wealth of sonic superlatives

Kenwood equipped this Excelon Reference receiver with custom-made or carefully curated sonic components— including three sets of gold-plated 5-volt preamp outputs — to deliver superb audio performance.  A 3-way crossover lets you adjust for separate highs, mids, and sub frequencies if you're amplifying subs, woofers, and tweeters separately. Kenwood's Drive EQ+ technology boosts certain frequencies that are easily masked by wind and tires rolling on asphalt. It also enhances your music's bottom end as your speed increases, so you can really feel those tunes as you drive. You can also tweak the sound to your ears' content with a 13-band equalizer and other sound shaping tools at your disposal.

What's in the box: